Well this headline may sound a little like I would like to pretend that I have a perfect life which I don’t. I have a whole lot of work waiting for me every day. There are customer requests coming in every week which is fine when you make your living on building electronic bagpipes. And yes – I love my work, it’s what I wanted to do for many years. I always liked to invent things and I always loved to build music instruments. For about ten years now I combine these two passions in developing and manufacturing the redpipes.

In the beginning I had a set of ideas for creating an electronic bagpipe. The basic idea was to provide a bagpipe which can be played everywhere at any time in a silent mode as well as in a concert level mode. From my point of view it couldn’t be a stick with sensors but an instrument with the look and feel of acoustic bagpipes with an authentic sound, fingering and handling. The simple idea was and is that bagpiping is about having a bag under your arm. When I introduced my prototype of a completely new electronic bagpipe to musicians in Germany, Switzerland and Scotland, the response was so positive, that I soon ran out of arguments why it would not be a good idea to market this innovation. At that time I had no idea what potential such an instrument could have worldwide nor how I could adress a worldwide customership. But I thought I should give it a try.

Meanwhile the redpipe has been shipped to Great Britain,Hongkong, Australia, the US, Russia, Latvia, France, Finland, Spain, Italy, Dubai and many more countries.

It is great to get the euphoric, sometimes heart-touching feedbacks from all around the world. I set value on close customer relations and my wife Bigy is taking care of all the requests and thoughts that are sent to us.

I am very proud of the acceptance that the redpipe has aquired among prefessional players and I listen carefully to their suggestions and wishes. The new OpticalTouch chanter for example is the result of this dialogue. The standard chanter has electronic touch sensors instead of holes, but some players would have preferred to have the same haptics with the redpipe as they know from acoustic pipes. 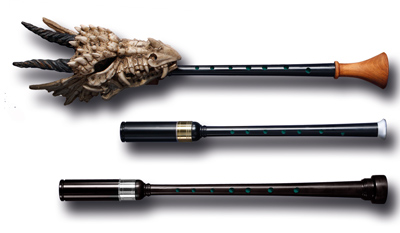 So the inventor in me was challenged again and I came up with the idea of building a chanter with original holes and light sensors inside that detect which holes are covered by fingers. So now our piper can decide which kind of sensor he prefers.

But it’s really not only the acceptance of professionals that rewards my work. What could be better than people telling you that – having not been able to play their beloved bagpipe for years – now with the redpipe they again can enjoy bagpipe playing because you can adjust the amount of air for blowing as well as the required pressure on the bag according to your individual needs.

When I started with the redpipes I had really no idea of the target group for this instrument. It has turned out that there are many: Many passionate pipers around the globe enjoy the fun of playing their bagpipe whenever they like – thanks to the Volume control, there are wedding pipers that finally can adjust the volume of their instrument to the specific location, there are lots of folk-related bands that finally can play tunes in any key they want.

And because there are so many individual reasons for playing the redpipe my customers are very different: black leather Folk-Metal players like Päde Kistler or Münggu, folk rockers like Peter Purvis, traditional pipe musicians like the 80 year old Australian bagpiper Betty Martin, who even won piping contests with her redpipe.

This website uses cookies, which are necessary for the technical operation of the website and are always set. Other cookies, which increase the usability of this website, serve for direct advertising or simplify interaction with other websites and social networks, will only be used with your consent.
Decline Accept all Configure